The @ADCSovereignty #FATCA lawsuit: A snapshot in time

Toronto – August 16, 2018: The possible end of the US @CitizenshipTax regime for individuals – @SolomonYue @Elena_CPA and @ExpatriationLaw

Judge Rose dismisses @FATCALawsuit: rules that “case is hereby TERMINATED” – Any harm NOT caused by USG but by foreign banks!

Because, Not All “Accidental Americans” Are The Same! Important for @ADCSovereignty #FATCA lawsuit

< Previous Next >
+ Add your own event Eventbrite

Tweets in the CBT lives of Americans Abroad

In Chapter 15 – To Be FORMWarmed Is To Be FORMArmed, we discussed the number of forms, complexity of the forms and the exposure to penalties that impact Americans abroad.

The reality is that, in the case of joint accounts, this means that the U.S. citizen will report the bank accounts of the spouse to the U.S. Government. Different people have different views of this.

The following discussion take place on Keith Redmond’s American Expatriates Facebook group. This is a closed group (meaning that you would have to join the group to read the post).

The reality of life for many Americans abroad is three-fold:

1. It is common for Americans abroad to marry non-U.S. citizens;

2. Americans abroad are (with few exceptions) required to report to U.S. Financial Crimes (Think Mr. FBAR) bank accounts that they either have signing authority over or where they can control the disposition of the funds.

3. In some countries, because of FATCA, it is very difficult for U.S. citizens to be able to obtain and maintain bank accounts. This is due to a perception (rightly or wrongly) that banks do NOT want to deal with U.S. citizens.

You will see from the Facebook discussion (which assumes all three of the above points), that many Americans abroad are very reluctant to share bank and financial accounts with their non-citizen (AKA “alien”) spouse.

Possible Conclusion: At the very least you understand the implications of a U.S. citizen holding joint accounts with an alien. Separate accounts would ensure that financial information about the alien will NOT be transmitted to the IRS. 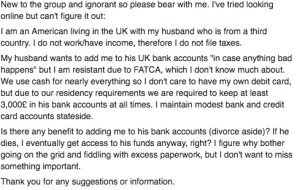 END_OF_DOCUMENT_TOKEN_TO_BE_REPLACED

Thank you for recent donations from:

This leaves a balance due of $2200 USD in order to procure the legal opinion for the lawsuit.

This will be the shortest chapter. I am certain that after having read Chapter 15 about “Form Crime” and the possible penalties (usually $10,000 a form”) you will want to know how get “Form Crime Relief”.

It is important for you to know that:

– “reasonable cause” does exist as a defense; and

– If you were truly ignorant of the form (who wouldn’t be?) then you it may work for you.

First, “Form Omissions” are generally what the IRS would call “Delinquent Information Returns“.

Delinquent International Information Return Submission Procedures https://t.co/k7pOBulIwk – how to file those forms you didn't know about

Penalty Relief Due to Reasonable Cause https://t.co/cB6G9stPVd – Begin understanding "reasonable cause" from the IRS directly

Many “Form Crime” penalties can be abated based on “reasonable cause”.

Marriage is a difficult relationship. That said, there are two kinds of marriages that have particular difficulties resulting form the “circumstances of a U.S. birth”.

I call these kinds of marriages an “FBAR Marriage“.

The problems of the “FBAR Marriage” begin with filing a tax return at all. They continue from there.

(Both the U.S. citizen and the alien need to fully understand the problems that U.S. citizenship will cause in various aspects of the marriage! Perhaps specialized pre-marriage counselling is desirable. )

See the posts referenced in the following two tweets.

"Married Filing Separately" – The Hidden Tax on #Americansabroad with an non-US spouse http://t.co/b6F2zT5xYb

"Married filing separately" – The hidden tax on #Americansabroad who marry a non-U.S. citizen https://t.co/Nn8zwRQHl9 via @TaxationAbroad

Q. How is US non-citizenship or US non-residence related to entitlement to US Social Security? http://t.co/cSuYx785WL A. In most cases not!

Social Security is a separate program that people “pay into” every year. In return for “paying in” the U.S. agrees to “pay out” when he reaches a certain age. How is his citizenship or residence in any way related to that?

Self employed Americans abroad (unless they live in a country with a “Totalization Agreement”) are required to pay the Social Security Tax ON INCOME EARNED OUTSIDE THE UNITED STATES. Surely you would agree that they should receive the benefits even if they live outside the United States.

Finally – “never getting citizenship …” There are many reasons people don’t acquire U.S. citizenship. In some cases they are citizens of countries that don’t allow dual or multiple citizenships.

This man worked. He paid into the system. He should be presumptively entitled to the benefits.

Discussion: Can you renounce US citizenship and still receive US Social Security? https://t.co/nI3jW0fLV4 – In general the answer is yes.

An identification of and “breakdown” of the issues …

In general, Americans abroad are eligible for U.S. Social Security and eligible for having their payment sent to their country of residence. Nevertheless, because it’s the United States of America, there are always issues …

This post includes a number of tweets which will reference you to “third party posts” about U.S. Social Security. Nevertheless, I strong recommend that you begin with the Official U.S. Government Social Security site. This site includes a specific “International Section“. Obviously it will always remain current. In fact, I urge you to make the Official U.S. Government site your most important “stopping point”. The site even includes an amazing tool to determine your entitlement to benefits.

Wouldn't You Like to Know How To Receive Social Security Benefits If You Weren't In the Country? Read my post: https://t.co/gWKEdfsAch

Let’s break the “issues” into the following categories:

1. As an American Abroad, are you entitled to U.S. Social Security at all?

2. What if part of my working life was in the United States and part of it was abroad? – The impact of “Totalization Agreements”

3. As a U.S. citizen abroad, does my country of residence affect my entitlement to U.S. Social Security?

International Programs – Your Payments While You Are Outside The United States – Country List 2 http://t.co/J1hP2ubx4F

4. What if I renounce U.S. citizenship. How does that the fact that I am no longer a U.S. citizen and am now a “Non-Resident Alien” affect my entitlement to U.S. Social Security?

You become a “Non-resident alien”. Your eligibility for benefits is determined here:

Will I Be Able to Collect Social Security Retirement Benefits If I Renounce My US Citizenship? http://t.co/aGmLiQyIOW

Taxation abroad of US Social Security – Are you are US person or non resident alien? http://t.co/jz0NX68Vuj @TaxationAbroad

6. How much U.S. Social Security do I receive anyway? I have heard that there is a “Windfall elimination provision”. Is that true?